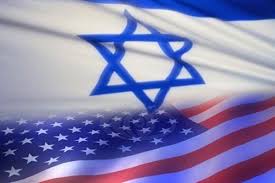 (Author’s note: This post, beginning with the featured image, is guaranteed to offend and anger many. Ask me if I care.) There are many nations on this earth in 2018. 193 are members of the U.N. The U stands for United. Talk about euphemisms…but I digress. Only 2 of those 193 were founded on an idea, the desire to worship without being persecuted. The rest of the nations are the result of conquest, wars, partition of other countries, revolutions and so forth. To say they were founded on an idea is not to say these people found uninhabited land somewhere, laid claim, settled on it and grew from there. Such would not be true of ANY modern nation. All nations displaced or absorbed indigenous peoples.

It is no surprise that these two nations are staunch allies, since their religions have the same origins. Bat-Ami Zucker wrote, in the Jewisharchives.org: The uniqueness of America’s relationship with Israel has drawn much attention. Even though their relationship has not been formalized, the two countries are bound together by a bond that in practice has been as strong as any alliance, written or unwritten. Fascinated by the tie between Israel and the United States, especially in view of the immense disparity “in size, power, and international role between the two countries,” many scholars have sought to examine its motivations. Similarities in the origins and history of the two countries stimulated American understanding, sympathy, and nostalgia. Its pioneering spirit was often compared with that of the American pioneers. For Americans, dedicated to the idea of achievement and progress, Israel’s accomplishments were seen as “little short of a miracle. Moreover, Israel’s economic success was seen as an example of what could be attained “through determination, hard work and application of modern technology.”

As of April, 2018, the two countries have something else in common: Thousands of poor, unarmed people attempting to invade their borders “without bloodshed.” This is indeed a noble idea, and destined to fail. The “caravan” of 3,000-5,000 Hondurans (and probably assorted others from Central America) is heading for the U.S. and far more than that number of Gazans is trying to breach their border with Israel. Some things differ: The Gazans are claiming a “right of return” to lands that they and their ancestors left 70 years ago; the Hondurans say they want a safe place to live, which doesn’t give them any choice of direction other than north. The Gazans share their border with Israel; the Hondurans have to pass through Guatemala (as violent a mess as Honduras) and Mexico (also hardly a haven of peace) to even reach the border of the U.S.

These things are similar: Neither group is getting over the border; while the majority of each group are peaceful and essentially are seeking a better life, it is all but certain that there are terrorists in their midst; neither group has expressed a desire to assimilate into the nation they are attempting to invade, nor are they likely to adopt the language and culture thereof. But the most glaring similarity between these groups is this: They have been victimized by their own people/government!

About 4 million Palestinian refugees live in Gaza, and the West Bank. Their ruling authorities have received billions in foreign aid, with what result? From Medialine, 2017: “After the establishment in the mid-90s of autonomous Palestinian territories in the West Bank and Gaza, many governments began providing the Palestinians with huge sums of foreign aid. The United States is the biggest of some 20-odd donors, followed by European bodies and states. Since 2008, the Palestinian economy has grown by a remarkable 64 percent, but the population still struggles with both high unemployment rates and is harmed by Israeli restrictions on trade in the West Bank and the blockade on the Gaza Strip. (author note: See below reasons for Israeli actions). “Today, the Palestinian Gross Domestic Product is some $8 billion annually, but living standards remain low as many lack the resources to create jobs and the skillsets to fill them.”

Where has most of the money gone? Rockets for Hamas to attack Israel, paying families of suicide bombers, rebuilding homes torn down by Israel in response to terrorism, and Swiss bank accounts for their “leadership”. (“The Palestinian Authority in the West Bank has just discovered what every Palestinian child knows — that hundreds of millions of dollars had been embezzled during the era of Yasser Arafat.” The Gatestone Institute.)

The Hondurans were also victimized by corruption on the part of their “leadership”, which allowed the extreme violence of narco cartels to flourish. We all, including the U.S.A., get the government we deserve. However, despite all that, I would like to see my country have an effective vetting process for deserving refugees. The USA is large enough to accommodate AND assimilate large numbers of refugees who want to live better lives, learn our language, embrace our history and founding principles…E PLURIBUS UNUM after all (Remember Algore saying that was latin for diversity, i.e. from the one, many? Hey Al, it is latin, but translates to “from the many, one.”) We used to call it the “melting pot.”

Am I sympathetic to the plight of these refugees? Yes. Will it matter? No. They aren’t getting in. When fleeing the mess in their own countries a non-option, perhaps what is left for them is to clean up the mess within their own borders. That, or a non-future in new refugee camps outside their borders.