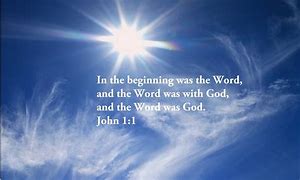 Matthew Henry’s commentary: The plainest reason why the Son of God is called the Word, seems to be, that as our words explain our minds to others, so was the Son of God sent in order to reveal his Father’s mind to the world. What the evangelist says of Christ proves that he is God. He asserts, His existence in the beginning; His coexistence with the Father. The Word was with God. All things were made by him, and not as an instrument. Without him was not any thing made that was made, from the highest angel to the meanest worm. This shows how well qualified he was for the work of our redemption and salvation. The light of reason, as well as the life of sense, is derived from him, and depends upon him. This eternal Word, this true Light shines, but the darkness comprehends it not. Let us pray without ceasing, that our eyes may be opened to behold this Light, that we may walk in it; and thus be made wise unto salvation, by faith in Jesus Christ.

Charles Spurgeon’s commentary: The divine Logos, whom we know as the Christ of God. “In the beginning was the Word.” The first words of this gospel remind us of the first words of the Old Testament: “In the beginning God created the heaven and the earth.” Even then “the Word” was; he existed before all time, even from everlasting. I know not how the Deity of Christ can be more plainly declared than in his eternal duration. He is from the beginning. In his glory he was “with God.” In his nature he “was God.” He that hung upon the cross was the Maker of all worlds. He that came as an infant, for our sake, was the Infinite. How low he stooped! How high he must have been that he could stoop so low! It never has done so; it never will. You may sometimes call the darkness, the ignorance of men, or the sin of men. If you like, you may call it the wisdom of men, and the righteousness of men, for that is only another form of the same darkness. “The light shineth in darkness; and the darkness comprehended it not.”