“It is I who by my great power and my outstretched arm have made the earth, with the men and animals that are on the earth, and I give it to whomever it seems right to me. Now I have given all these lands into the hand of Nebuchadnezzar, the king of Babylon, my servant, and I have given him also the beasts of the field to serve him. All the nations shall serve him and his son and his grandson, until the time of his own land comes. Then many nations and great kings shall make him their slave.” This elaborate prophecy came to pass.

God can and does use the more evil to discipline the less evil, especially the people of God, and even to bring good. Does God hate evil? Yes. Does God hate the people who are evildoers? I don’t think so, until He gives them many chances to repent and they harden their necks. “He who is often reproved, yet stiffens his neck, will suddenly be broken beyond healing.” Proverbs 29:1.  Sometimes God’s own people are more hateful than the evildoers. Jonah was a prophet whom God sent to Nineveh, the capital of Assyria, the most evil city of the most evil empire of that time, to preach repentance to the populace. But Jonah ran away and got on a ship heading to Tarshish*, the opposite way. We all know what happened. A huge storm came up. “And they (the crew) said to one another, ‘Come, let us cast lots, that we may know on whose account this evil has come upon us.’ So they cast lots, and the lot fell on Jonah. Then they said to him, ‘Tell us on whose account this evil has come upon us. What is your occupation? And where do you come from? What is your country? And of what people are you?’ And he said to them, ‘I am a Hebrew, and I fear the Lord, the God of heaven, who made the sea and the dry land.’ Then the men were exceedingly afraid and said to him, ‘What is this that you have done?’ For the men knew that he was fleeing from the presence of the Lord, because he had told them.” Jonah 1:7-10.

This was a pagan crew, yet they respected and feared the God of heaven and were loathe to harm the man who brought calamity on them! “Then they said to him, ‘What shall we do to you, that the sea may quiet down for us?’ For the sea grew more and more tempestuous. He said to them, ‘Pick me up and hurl me into the sea; then the sea will quiet down for you, for I know it is because of me that this great tempest has come upon you.’ Nevertheless, the men rowed hard to get back to dry land, but they could not, for the sea grew more and more tempestuous against them. Therefore they called out to the Lord, ‘O Lord, let us not perish for this man’s life, and lay not on us innocent blood, for you, O Lord, have done as it pleased you.’ So they picked up Jonah and hurled him into the sea, and the sea ceased from its raging. Then the men feared the Lord exceedingly, and they offered a sacrifice to the Lord and made vows.” Jonah 1:11-16.

Jonah was swallowed by a huge fish, and remained in the fish for three days and three nights. The Sunday school stories say it was a whale, but tend to miss the point. As a kid, I thought Jonah ran away because he feared the king of Nineveh and the prospect of preaching to such a wicked and violent people. Understandable, but not the reason.

“Jonah began to go into the city, going a day’s journey. And he called out, ‘Yet forty days, and Nineveh shall be overthrown!’ And the people of Nineveh believed God. They called for a fast and put on sackcloth, from the greatest of them to the least of them. The word reached the king of Nineveh, and he arose from his throne, removed his robe, covered himself with sackcloth, and sat in ashes. When God saw what they did, how they turned from their evil way, God relented of the disaster that he had said he would do to them, and he did not do it. But it displeased Jonah exceedingly and he was angry. And he prayed to the Lord and said, ‘O Lord, is not this what I said when I was yet in my country? That is why I made haste to flee to Tarshish; for I knew that you are a gracious God and merciful, slow to anger and abounding in steadfast love, and relenting from disaster. Therefore now, O Lord, please take my life from me, for it is better for me to die than to live.’ And the Lord said, ‘Do you do well to be angry?’” Jonah 3.

In Genesis 4, Cain is angry with his brother Abel because God accepted Abel’s offering and rejected Cain’s. God admonished Cain in similar language. “And the Lord had regard for Abel and his offering, but for Cain and his offering he had no regard. So Cain was very angry, and his face fell. The Lord said to Cain, “Why are you angry, and why has your face fallen? If you do well, will you not be accepted? And if you do not do well, sin is crouching at the door. Its desire is contrary to you, but you must rule over it.” Genesis 4:7.

Cain did not do well, he killed Abel right after God’s admonition. God should have killed Cain in response. Instead, He exiled Cain from the Garden of Eden. Even in the punishment, God was merciful. ‘And now you are cursed from the ground, which has opened its mouth to receive your brother’s blood from your hand. When you work the ground, it shall no longer yield to you its strength. You shall be a fugitive and a wanderer on the earth.’ Cain said to the Lord, ‘My punishment is greater than I can bear. Behold, you have driven me today away from the ground, and from your face I shall be hidden. I shall be a fugitive and a wanderer on the earth, and whoever finds me will kill me.’ Then the Lord said to him, ‘Not so! If anyone kills Cain, vengeance shall be taken on him sevenfold.’ And the Lord put a mark on Cain, lest any who found him should attack him.”

God’s ways are not our ways. Thank God for that!

*Tarshish is in modern day Spain, north of Gibraltar. 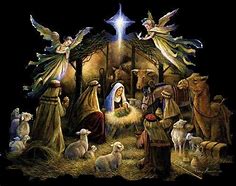 You probably think I don’t know what Starbucks sells! “Hey dummy, they don’t do burgers….” Well, not yet anyway. But for those of you who remember one of the most famous and effective commercials of all time, circa 1984 (hmm, gives one pause), from the burger chain Wendy’s, featuring Clara Peller, that phrase caught on in the public ‘s imagination and became a catchphrase for questioning the quality of any product or idea. If you have never seen the commercial, it’s time. You know what to do (you’d better, if you are young enough not to have seen it). So what does that phrase have to do with Starbucks supposedly “doubling down” on seasonal cheer? If you can’t figure it out from the two pics above, I’m not sure I can help you.

From Business Insider: “Last year, the chain’s holiday sales slumped in part because stores ‘didn’t sufficiently reflect the festive environment,’ Chief Operating Officer Roz Brewer said on a call with investors on Thursday. Starbucks’ US same-store sales fell 2% in the quarter that ended on December 31, 2017, due in large part to the chain’s disappointing sales on holiday beverages, merchandise and gift cards. Starbucks is going all-in on holiday festivities this year, with stores getting decked out in seasonal decor and baristas donning red aprons starting this Friday. Friday will additionally see the return of Starbucks’ red cups and seasonal menu items. The company is also pushing its holiday assortment with a ‘more robust’ media plan. In years past, Starbucks has faced accusations of a lack of seasonal merriness, especially as it relates to Christmas.”

All-in??? Didn’t sufficiently reflect the festive environment??? What a lame, meaningless generality. Is she referring to Festivus, Mr. Costanza’s “holiday for the rest of us”? Okay, now what’s this old curmudgeon raving about? From the Festivus website:

“People have been inspired by this zany, offbeat Seinfeld holiday and now celebrate Festivus as any other holiday. According to the Seinfeld model, Festivus is celebrated on December 23rd. However many people celebrate it other times in December and even at other times throughout the year. The slogan of Festivus is “A Festivus for the rest of us!” The usual holiday tradition of a tree is manifested in an unadorned aluminum pole, which is in direct contrast to normal holiday materialism. Those attending Festivus may also participate in the “Airing of Grievances” which is an opportunity to tell others how they have disappointed you in the past year, followed by a Festivus dinner, and then completed by the “Feats of Strength” where the head of the household must be pinned.”

But I digress. Notice any pattern in the colors of the cups? Red and green? Could it possibly be they’re trying to say Christmas without saying it? Just sayin. Why not write and say Christmas? Is that hate speech yet? But Uncle Curmudgeon, this season also includes Hanukkah, Kwanzaa (pan African), Omisoka (Japan), Saturnalia (pagans),  Boxing Day (Britain, nothing to do with the sport) and Fiesta of Our Lady Guadalupe (Mexican), not to mention Festivus (okay, I won’t). Yah, I know, but here in the good old USA, Christmas IS the season. There would be practically no celebration without it. Some ultra pious ministers of the gospel might point out that Christmas is not a real Christian holiday, because most traditions associated with it are actually pagan. Okay, there goes the Christmas tree, which is fine with me, since the cheapest ones I always buy leave needles all over the floor. But answer me this Batman (pagan savior?), why do we give each other presents? Without Christmas presents, capitalism would collapse, but that’s not the reason. Look at the picture of the angels and the manger. The wise men gave Jesus Christ presents, and so have millions of families throughout the years, so suck it up and pull out that plastic.

Once again, I digress. It’s an occupational hazard of being too creative….. or distracted, I forget which. But the whole point of this blog post is that Starbucks is trying to have it both ways: pander to Christians, who are still a majority of Americans, while not offending anyone else by not mentioning Christmas, instead using the code word “festive”. If this were a political campaign, I would call that a dog whistle (festive=Christmas but shhh). If I ever actually use that term, you have permission to blow my server up.